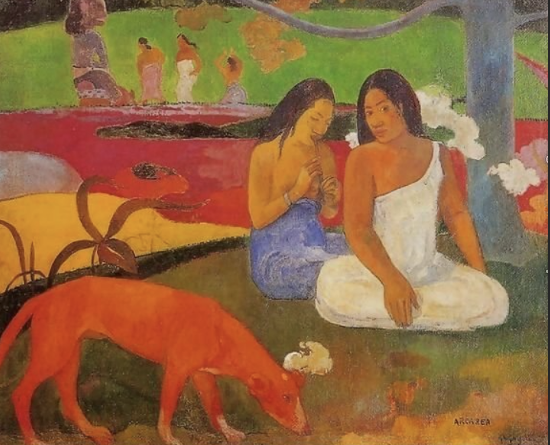 Paul Gauguin was a French artist from the post-impressionist era. However, he was distinct from other artists of the impressionist period because of the choice and artistic techniques he pursued. He was more likely a fan of the Synthesist style, which differed from Impressionism.

Gauguin artist was famous for depicting the people and landscapes of French Polynesia, where he spent almost ten years of his life. Upcoming artists such as Pablo Piccaso and Henri Matisse were captivated by the works 0f Gauguin. His work was an exemplified legacy of Avante-Garde style and modern subjects.

There was nothing this artist par excellence left to try, from wood carvings to paintings, from sculptors to printmaking- he was a master of all. This hard work and extraordinary talent got immense recognition, which is why Pual Gaugin’s artworks are among the topmost-expensive paintings in the world.

French painter Paul Gauguin believed in decorative reliefs and cherished painting as more than just a hobby or an income source. Every painting of his was an elaborate reflection of his artistic pursuits of perfection. He employed a technique known as Peinture an I’essence. It is a technique in which the oil or the binder medium is drained from the paint.

The leftover pigment is mixed with turpentine. This technique was used by him while creating monotypes. Apart from these, Paul Gauguin famous drawings are done with watercolors and gouache colors. It was not just the types of colors but a detailed illustration of his thoughts that just outshined on every canvas.

Many of his initial artworks were centralized on muted effects or themes. After some time, he switched on to his experimental side as an artist and began to create canavs4s that had their essence of independent existence and vitality. The man of perfection was also intrigued with Japanese prints and sure did. Many of his artworks narrate the same.

A variety of his paintings had an emotional purity conveyed most straightforwardly. His artworks were personified grander than imagination, from shapes to contours, colors to elements. His landscapes manifested a complete balance of harmony between man and nature.

When Will You Marry Me?

In February 21015, Paul Gauguin’s When Will You Marry Me? Was sold for close to $210 million and is the third most expensive ever work of art. The painting entails native women dressed up in nudes, traditional Tahitian clothing, and modern western styles.

The front and the middle grounds of the painting are painted with shades of green, blue, and yellows. You will see a woman sitting at the front and middle ground threshold. The white tiara behind her left ear indicates that she is waiting for her husband. While just behind her is sitting a second figure wearing a western-style dress.

The facial features of the first woman are simplified as if she is stretching herself and somewhat portray a Japanese posture. In addition, the rear female figure in the artwork is flushed with a yellow-bluish area, and her face is painted with individual facial features at the center of the image.

To note, the pink dress she is wearing represents an utterly distinct color from the entire color scheme of Gauguin’s artwork. At the bottom is written “NAFEA Faa ipoipo,” which means When Will You Marry Me. It is inscribed in Tahiti because he was fascinated by the language.

Paul Gauguin’s artworks gained so much more fame after his death. Sergei Shchukin, a Russian collector, acquired many of his later paintings. Most of the famous Gauguin paintings are displayed in the Pushkin Museum and at the Hermitage.

Gauguin Museum is a Japanese-styled collection of his exhibits, documents, reproductions, block prints, and original collection of Gauguin works. Other than these, in 2003, the Paul Gauguin Cultural Center opened in the Marquesas Islands, Atuona.

His paintings, Fruits on Table, have an estimated value of €10m and €30m, stolen in 1970. It was later discovered in Italy and, with a work by Pierre Bonnard, was bought at a railway lost property by a Fiat employee in 1975.

Influence of the Great Artist

Painter Paul Gauguin influenced many artists back in time, which gave birth to different masters of the art. Amongst his influential seekers was Pablo Picasso. He was awe-inspired by Gauguin’s works and admired his paintings to an unimaginable extent.

Nude paintings and monumental sculptures by Picasso recall the work of Pablo Picasso, which showcases a deep interest in primitive art. Most of the paintings of Picasso from 1906 represented a highly influenced work by Gauguin’s sculptures, painting, printmaking, and writings.

Picasso grasped such an influence from Gauguin when he first met his friend, Spanish sculptor and ceramist Paco Durrio, in Paris. Durrio carried a lot of Gauguin’s artworks in hand because he was a great friend of Gauguin and an unpaid agent who helped Paul on the professional front.

After Durrio and Picasso met, he introduced Picasso to Gauguin’s stoneware and art collections. And all that work done by Gauguin left Picasso spellbound and made him a permanent fan of his work. Later in life, before Gauguin died, he and Picasso were represented at Ambroise Vollard’s gallery.

The fact is now more evident than ever that Paul Gauguin was a great artist, and he gave this world the third most expensive painting in the world – When Will You Marry Me. Learn about Gauguin artist and explore his artistic achievements and styles.